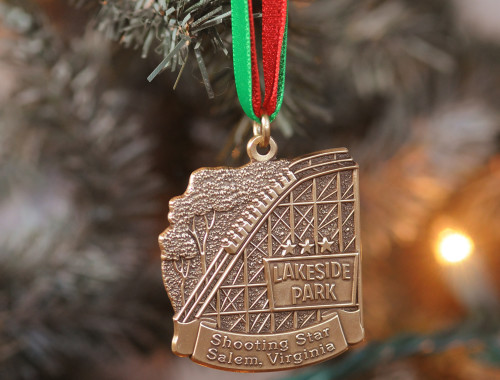 The Shooting Star Roller Coaster Circa 1968

The Shooting Star roller coaster, located at Lakeside Park in Salem, VA, began operation in 1968. Constructed of wood, it was designed by Philadelphia Toboggan Coasters, Inc. at a cost of $225,000. The structure stood 84 feet high using two trains each having a sit down ride capacity of eighteen (18).

In 1920 Lakeside Park opened as a swimming venue with the construction of a very large lake surrounded by sandy beach, pavilion, bath houses and restaurant. Rides and other amusing attractions were added over the years. The Park was a favorite destination for residents of the Roanoke Valley for more than 65 years.

Following the devastating flood of 1985 owners attempted to repair the damaged coaster. While testing the ride in 1986 a fatal accident occurred which in the end contributed to closing the park. In early 2015 a group called Lakeside Reborn organized to promote the concept of reintroducing the family oriented amusement park to the Roanoke Valley.