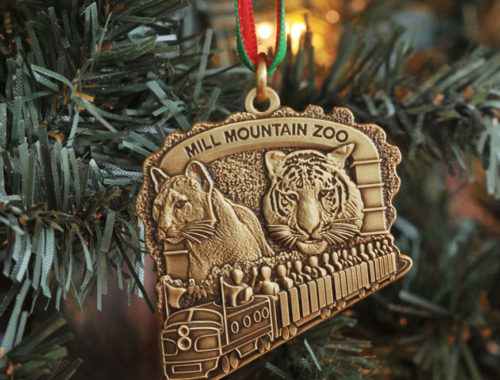 The Mill Mountain Zoo is located atop Roanoke’s Mill Mountain, home of the neon Star landmark. Having been established in 1952 as primarily a local attraction operated by the city, the Zoo is now overseen by the non profit Blue Ridge Zoological Society and easily accessible to both Blue Ridge Parkway and the I-81 Interstate system passing through Virginia’s Roanoke Valley.
The Zoo has been home to vulnerable and endangered animals. One of the most well known long term residents was “Ruby,” a tiger who became a familiar favorite of visitors for a generation. Looking to the future, according to the Director of Operations, the “goal is … a sharp focus on native species from the Eastern United States.” A prime example is the cougar (or mountain lion). Past and future are both emphasized on the front of this year’s ornament. The current population includes birds, mammals and reptiles.
Of interest in planning a visit is the “Zoo Choo,” a miniature railroad encircling the area. The relatively small zoo is open daily and can be explored in two hours.

Be the first to review “Mill Mountain Zoo” Cancel reply