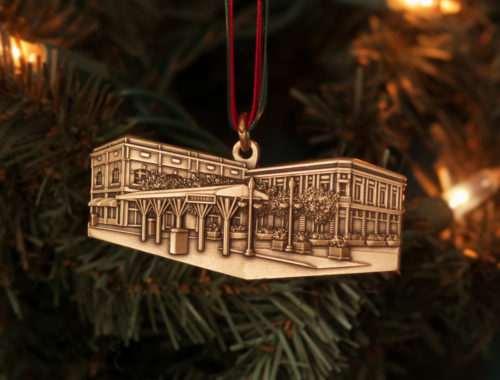 The Market Square occupies the space opposite the City Market Building on Campbell Avenue in the heart of City Market District of Downtown Roanoke. The open air area was authorized as a City project in 1884, followed by construction of the centerpiece Market Building in 1886. The surrounding space has since been occupied by a mix of fresh fruits and vegetables, crafts and flower vendors, called “hucksters” in the early days. Roughly one hundred years later the area gained the distinction of being named to the National Register of Historic Places, and, remains the oldest continuously operated open air market in the Commonwealth of Virginia.
Not only a marketplace for items to buy, the City Market District also is a place for festivals year round, including the weekly “Dickens of a Christmas” held on Friday nights during December in the runup to Christmas.
Other sites within the bounds of the District that are among our Roanoke Collection include: Market Building, Fire Station No.1, the H&C Coffee and Dr.Pepper neon signs.