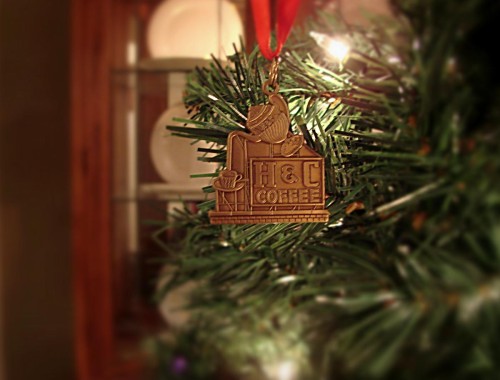 The owners of Woods Brothers Coffee Company contracted with the Harley Webster Sign Company to build a sign inspired by one seen in Times Square, New York City.  In late 1946 the “speller-flasher” neon sign was erected atop the plant on Campbell Avenue at a cost of $3,000.  Later,  it was moved to the present location  in downtown Roanoke.

Through the efforts of the Roanoke Valley Preservation Foundation,  the owners of Billy’s Ritz and the H&C Coffee Company,  the sign was restored and relit in December of 1991.  However, after a decade of non functioning,  major repairs were again undertaken in 2005.  The neon landmark continues to “twinkle and pour down over the City Market,”  a welcoming symbol of hospitality.

Be the first to review “H&C Coffee Sign” Cancel reply